In the summer of 2009 I revisited my 2004 summer apprenticeship at Object Mentor. What follows is the original 2004 post and then some 2009 commentary.

Word Press is up and running! I had a bunch of ideas when I arrived, but before I got too far I said to my self: ‘Self, maybe you outta try starting Apache, MySQL, and run install.php from Mozilla just one more time’ Well, I wouldn’t be telling ya about it if it hadn’t worked. Of course when I say it worked, I mean that the install actually started but not that everything was fine from the get go. First I gave it the path that the wordpress folder was in, but not where the files were. So everything failed, but did so is a way that I could see that every place it was looking was missing a ‘/wordpress’ so I fixed that. Then I tried to look at it on another computer but I was getting a screwed up version of the site. What wordpress really wants when it asks for the location is something like this: “181.783.13.1/wordpress” Eventually that’ll be something a wee bit more user-friendly, but it’ll do for now. Finally the install went smooth. Excellent.

So why did this take forever? Here’s the Reader’s Digest version: Red Hat Linux automatically installs MySQL, PHP, and Apache so when I attempted to install XAMPP (which is a bundle of the three) things got a little nutty. Same problem when I tried to install MySQL, PHP, and Apache separately. But all this might have been fine if I had known that the way you’re really supposed to run install.php is not from the command line but by typing in install.php in a browser pointed at your sever (which, for me, would be http://localhost/wordpress/wp-admin/install.php). Over a week went by with me trying everything I could think of but it didn’t matter because every time I typed in ‘php install.php’ I got the same error telling me that: maybe MySQL isn’t running, maybe your server isn’t running, maybe you set up the password/username are wrong, or maybe PHP is configured wrong. Not one of those things actually turned out to be the problem, but I did learn lots about Linux, MySQL, PHP, and Apache in the process.

In response to my request for a side-project, Micah has suggested that I join the club and write a chess program. This may keep me busy for awhile.

The weekend in Michigan was fantastic. My former boss gave me ‘a bicycle built for two’ (are you thinking of the HAL 9000? I am) and it’s been rusting in my backyard for 9 months. On Friday, I took ‘er apart and crammed it into my Saturn (no easy feat, mind you. but nothing some WD-40, the wrong tools, and a whole bunch of swearing couldn’t fix). Father and son were able to put the tandem back together in Michigan and it’s a whole busload of fun! The brakes are a little dicey and the tires might be leaking, but everyone’s your friend on a tandem. Cars slow down to look, kids laugh and point, people wave and say nice, friendly things. Riding along the lakeshore with my wife was quite the time. Here’s a picture: 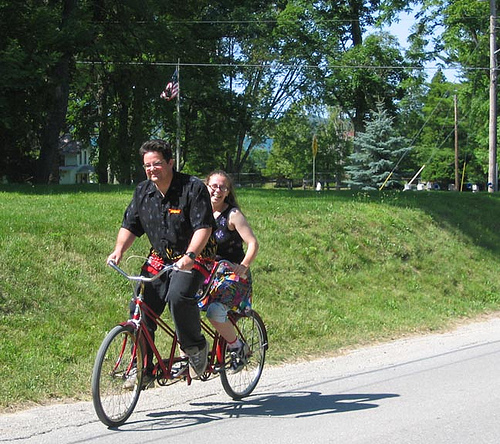 So I started the 5 minute install back on July 8th and now, a mere 17 days later, it is complete. By the way ButUncleBob.com (the blog I was trying to set up) had a good run from 2004 through 2006 but has since been retired/mothballed.