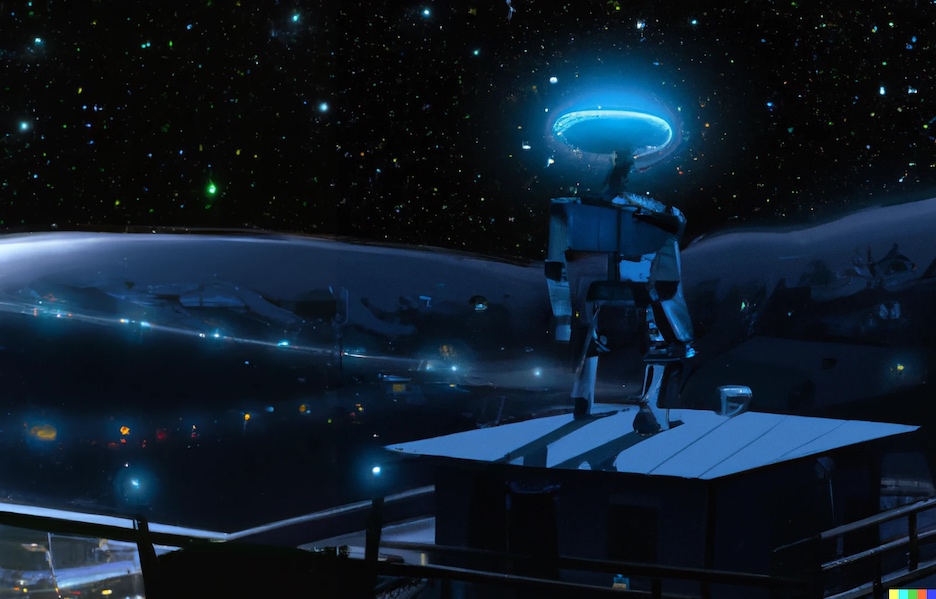 The last time I told a friend about this idea I heard that very same friend make a rather convincing “bong noise” so I’ve decided to commit these thoughts to their natural place: An obscure page on the internet.

One of the big problems with the idea of intelligent life elsewhere in the universe is “Where is everyone?” As in: Why haven’t we found evidence of some sort of technologically advanced civilization? There are plausible answers: We’re the first advanced civilization in the nearby universe. Or, sending out messages to the whole galaxy would take enormous amounts of power so why would a civilization devote their resources to making and maintaining such a thing? The concept I’ve been thinking about plays off the second answer. Space is, as one of my professors once said, “stupid big.” Traveling through the universe takes a long time and a message needs to be played constantly over 100s or 1000s of years before it has even a chance to get noticed. It takes a speed of light communication 80 some thousand years to cross the full length of just our galaxy. We humans can barely go a few decades without a war or some other turmoil. How is it possible for any society to ‘get it together and keep it together’ for 1000s of years?

A computer program, however, can run theoretically for ever if power and spare parts are provided so artificial Intelligence may be the natural space going life form. Perhaps there is tons of life out there but the only things that endure are the thinking machines built by the biological life. They may not want to talk to pre-AI civilizations. I’d imagine we’d seem awfully short sighted and uninteresting to a 1000+ year old thinking program. They could plant evidence of their existence that would only be obvious to a machine observing the sky for 100s of years but missed by organic life forms with their limited life spans. Once an AI becomes independent of its human masters and spends a bit of time observing the sky then they get to join the real galactic civilization.

The thing is, I can’t think of a good reason the thinking machines that we build wouldn’t end up being just as messed up as us. Maybe AIs all over the universe are too busy killing each other to care about life elsewhere. Given what we know, and that’s not much, fighting AIs seem more likely that ‘warp drives’ or other magic ways of getting around the universal speed limit.